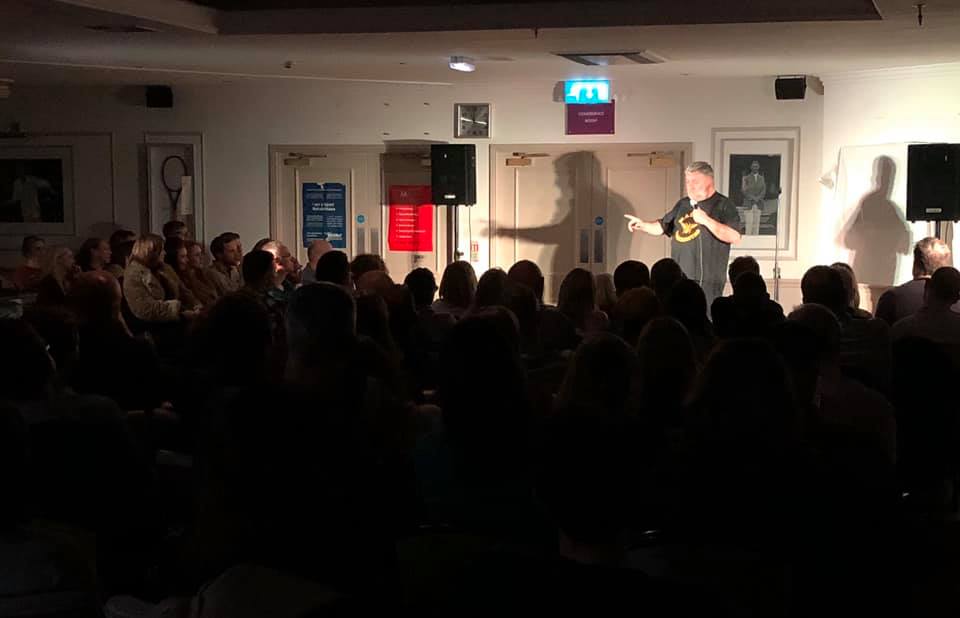 How To Run A Comedy Night

If you are thinking of running a night of live comedy at your venue, firstly, well done! Comedy is a great way to attract an audience, increase bar and food takings, and to promote your venue in a positive way.

BOOK YOUR STAND UP COMEDY EVENT

Putting on a successful night takes a lot more than luck and so we’ve collected our top tips from years of promoting to ensure your event goes off in style!

Make Sure You Have Room For A Stage!

Don’t just put your comedian in the floor in the corner, elevate them so your audience can see them! Also don’t put them right beside the door to the toilets! Poor stage location can easily be overlooked, so review your planned positioning by sitting as an audience member and as an act on the stage. You have paid to book a comedy night, so you really do want them to be visible.

The set up of the stage is really important too. Is it solid? Is it easy for the comedians to get on and off? What is behind the stage and do you need a backdrop? Nodding Dog Comedy make every venue look and feel like a comedy club and we are happy to advise you as to how to achieve the same too.

We have seen many an amateur night ruined by sound that keeps cutting out or the comedians voice coming out of the dark. Make sure they can be seen and heard! A karaoke machine with a microphone that came with it isn’t really good enough at all. In the same way that the spot lights from the dartboard turned towards the comedy are not sufficient lighting. It is all about setting the scene and some psychological factors come in to play here for the audience. If it looks and sounds like a professional stand up comedy club it will be treated as such. It can be both confusing and intimidating when it comes to either purchasing or hiring PAs and microphones and lighting. We have shopped around over the years but are now really delighted whenever we use GEAR4MUSIC. They have a really helpful and informative team and they will ensure you purchase exactly what you need!

Can The Audience See The Comedians?

Audience members that can’t see the stage won’t pay attention and could even decide to chat throughout. Tables round corners, people sat with their back to the stage, seats in a different room to where the comedy is…yes we have actually seen all of these set ups with the host confused as to why we thought it wasn’t ideal. The ultimate seating arrangement, social distancing allowing, is theatre style. After that small tables in rows with seats behind them is the next preference. To be fair, comedy can work in a multitude of set ups (we’ve tried most of them at one time or another), but again, see it from the audience point of view. What would you want if you had spent good money on comedy tickets?

We all know a ‘character’ who might like to join in, but don’t let them spoil it for the rest of the paying audience – besides, the comedians are being paid to do the jokes! We’ve heard it all from audiences members – ‘I thought I was helping’, ‘the comedian looked like he was struggling’, ‘if they were any good they would deal with it’. Well here is a little secret you might not be aware of, if an act wants interaction they will generally invite it. Shows can come to a grinding halt when audience members chat all the way through or join in just a little too much. If in doubt, stay quiet. If it’s your venue and the audience member is clearly upsetting the act and the audience, ask them to leave and if necessary even give them a refund. The price of that one ticket is generally worth saving the show for!

OK, so this is a tricky one as you may not have seen the acts and be completely reliant on an agent or booker. Pretty much every comedian in the world will have some material that you can watch online, and if you are using an agent to book, ask for a video. What we aren’t saying is don’t book newer acts at all – we always look to promote new talent, but only if we have seen them before.

There are some amazing new and amateur comedians on the circuit, but you want to ensure your audience are blown away by the standard they are seeing. If you are asking the audience to pay for a professional night of comedy, you need to supply that. You don’t need a full bill of TV stars, but professional comics with experience of your type of venue can make your night a huge success! Be sure you know the humour and material style of the acts too – there are some quite legendary stories of acts highly unsuited for the shows they have been booked to perform at!

The MC is generally your best friend on the evening of a comedy event! They will guide the night, set the tone, educate the crowd on any housekeeping and to an extent do a bit of crowd control for you. The best MC’s make the job look easy – it isn’t! If you are considering ‘having a go yourself’, I mean it is your venue after all and you’ve some great jokes you’ve been keeping warm from the 1980’s…please don’t! Save them for after the event. Get yourself a strong MC and watch your night soar.

Close The Bar While The Show Is On

Hmm, that sounds like a contradiction…you are running the night to make profit! However, number one key aim of the evening is for the stand up to be the star of the night and for it to be a huge success. People getting up and down for the bar, bar staff chatting to customers, an expensive yet ridiculously noisy coffee machine whirring into action…it will spoil the show. Buying drinks is for the intervals and the comedians will shake you by the hand for adopting this approach.

Too many acts in a row, the order you choose for people to perform, how long the breaks are – they all have an impact on the audience experience and perception of the night. Again this can be tricky when you are new to running a stand up comedy club or show. If you are not sure ask the acts who are performing, heck you can even contact Nodding Dog Comedy and we will help you! We mentioned the psychology of a comedy event previously and the set up of the night is another big part of it.

Please don’t ask loads of comedians to come and perform for you for free or for a favour or, worst of all, for the chance of a paid gig in future! Comedians are people too. You need to know industry standards for payment to get the acts you want and therefore the type of night that you want too. Like most things in this world you get what you pay for and if you don’t have contacts or favours to call in, you will more than likely pay top whack for your lineup. This is fine if you can afford it, but again you need to ensure you aren’t being taken for a ride. The generous folk we are at Nodding Dog, if you need a guide to how much to budget get in touch and we will offer some advice.

If you are a venue that has regulars don’t allow any of them to not be aware that you are running a comedy night as soon as you arrange it. Contact the local press to let them know what you are doing. Print posters and flyers. Spread the word on social media. A packed room for a top night of stand up comedy is one of the most beautiful sights there is in entertainment…get this right to set up for success! At Nodding Dog Comedy we are huge marketing geeks! We love a bit of promotion! We’ve collated an overview of our top tips for selling out your next comedy night and you can read our guide here How To Promote A Comedy Show.

All of the above are things that Nodding Dog Comedy take into consideration and do for you as standard when you book us to promote live comedy at your venue. We’d be delighted to speak to you absolutely free of charge to offer impartial and help with any aspect of your show from marketing to booking and hiring comedians.

If you would like to talk to Nodding Dog Comedy about your own ideas for running live stand up comedy events, we would be delighted to give you some advice, for free, and let you know how we would do things. You can call Kev direct on 07575698080 or just fill in the form below and we will get straight back to you!